March 25, 2019
Synopsis: Still reeling from his promotion to sergeant and the addition of an obsessive but ineffective constable to his police station, Hamish Macbeth must contend with a self-proclaimed "gypsy," Sean and his girlfriend, who have parked their van in Lochdubh and may or may not be behind a series of thefts around town and a growing feeling of negativity that has even affected the local minister. When Sean is found murdered, Hamish must reluctantly investigate his friends and makes a discovery that may require him to put his job on the line to protect them. 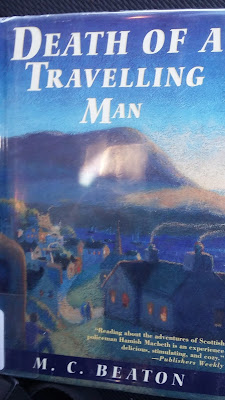 Review: I'm not sure if it is because I overdid it the day before or if it was the somewhat gloomy weather, but I just didn't seem to have a lot of energy yesterday. So, after going to church and getting the garbage out, I pretty much just crashed on the couch all day and, while watching Rocky out of the corner of my eye, finished this book.

As I read more and more M. C. Beaton books, I can't help but compare her mysteries to the Agatha Christie mysteries I've also read. For the most part, there are just enough noticeable differences. But, in this case, if it weren't for the main character, Hamish, I'm not sure I really could have told them apart.

A big part of this is Beaton seemed to borrow Christie's somewhat common practice of having the most obvious suspect ruled out almost immediately with an air-tight alibi. Whenever I see that in a Christie book, I pretty much know that person will turn out to be the killer. And, unfortunately, that wound up being the case with this one as well. So, as far as the mystery is concerned, at least, I was actually kind of disappointed.

That being said, there were some other things I did find I liked about this book. For one, I did like how the various Lochdubh residents wound up having their own dirty laundry as far as the newcomer, Sean, was concerned. In addition to making them potential suspects, it did put Hamish in a pretty bad spot too since he couldn't protect his friends without putting his job on the line and, at the same time, the full truth about what happened could send the village, which was already on edge, past a point of no return. It was definitely something that kept the book interesting even as it was becoming more and more obvious who the killer was.

I did find I was a bit undecided about the additional of PC Willie Lamont as Hamish's help. Ultimately, I do like the impact he has on the series going forward (mostly in regards to Hamish's love life). But, part of me feels as though he was a bit wasted. I think I would have rather seen him be more of a thorn in Hamish's side with him trying to solve the case before his superior did. Instead, it was kind of easy to forget about him and I was glad when Beaton decided to let things return to normal by the end of the book just because I just saw no future for him long-term. Plus, if you really think about it, is there any real reason why Hamish couldn't simply be promoted without giving him help? It's not as though there is any crime in Lochdubh, except for the occasional murder, of course.

Final Opinion: There were some things I did find I enjoyed about this book. But, when compared to others from the series, I'm not able to count it as one of my favorites.