Book Review: The Case of the Angry Mourner by Erle Stanley Gardner (1951)

Synopsis: Belle Adrian doesn't approve of her daughter, Carlotta's, relationship with Arthur Cushing. When she hears a scream coming from Arthur's cabin and Carlotta's car isn't in the garage, she investigates and discovers Arthur has been murdered. Believing her daughter is guilty, Belle does her best to remove any incriminating evidence and continues to keep her mouth shut even when she is facing murder charges. Fortunately for her, Perry Mason happens to be in town on vacation. 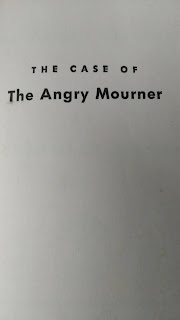 Review: It's raining and kind of cold outside today so, not being able to do too much outside, I wound up finishing this book. Overall, I thought it was an enjoyable murder mystery.

OK, to be honest, I didn't find it too difficult to figure out who the killer was. I had a suspicion almost from the very start and, once the case made it to court, the evidence and testimony only confirmed my theory. Despite that, there was a lot to like about this book.

I especially liked the way the evidence in the case either pointed to Belle or her daughter, depending on how you interpreted it. Carlotta had been at the house for dinner, her car had a piece of broken glass from Arthur's home in the tire and there were very clear footprints that could have only been made by the two women. While the book made it clear Belle was innocent (even before she met Mason), she was more than willing to look guilty if it saved her daughter.

I also liked the additional challenge Mason faced by defending his client in a small town setting that worked against her, including having the prosecution being funded by the victim's father and Mason's star witness being advised to get an attorney to make it difficult for her to be examined on the stand. Mason also needed some luck to avoid getting caught in a bluff that could have gotten him in trouble. It was one of those things that kept the book interesting even though I knew who the real killer was.

Final Opinion: I wish it would have been a little more difficult to figure out who the murderer was but, overall, I found I enjoyed this book and would recommend it as something to read on a rainy day.