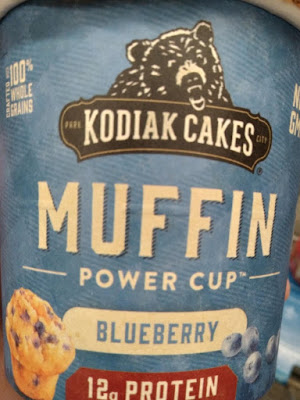 Anyone who knows me, knows blueberry muffins are my favorite. In fact, I rarely eat any other kind. That's part of why I purchased this product. I've seen similar items but none of them with blueberries.

From a convenience standpoint, I have no complaints. Like the other Power Cup, it was simply a matter of mixing in water and microwaving the muffin for about a minute. At minimum, it was easier and a whole lot less messy than making a batch of them to bake.

My biggest problem with this one was the taste. I won't go as far as to say I hated it but I definitely didn't enjoy it as much as I was expecting. I was expecting something a little bit sweeter, especially with all the blueberry chunks that were in it, and that just wasn't the case. If anything, I think it tasted a bit more like a blueberry pancake than a muffin. I like blueberry pancakes too, don't get me wrong, it's just not the same.