Synopsis: While playing an erratic round of golf, Bobby Jones finds a stranger at the bottom of a cliff. It is too late to save the man's life but Bobby is with him when he mutters his last words, "why didn't they ask Evans?" The death is ruled accidental but when someone tries to poison Bobby, his friend Lady Frances Derwent, suspects the deceased man was pushed and the pair decide to investigate. 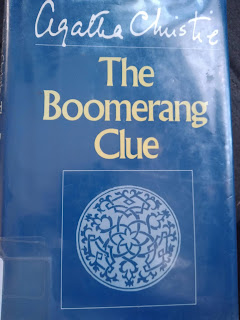 Review: It had been a while since I took the time to read an Agatha Christie mystery so, while I was at the library last week, I picked up this book. I wasn't really sure what to expect from it but it turned out to be one of my favorites.

I think the thing that intrigued me about this book was the way it seemed to have multiple storylines that may or may not be related to each other. Bobby and "Frankie" came across multiple possible suspects ranging from a man who was left alone with the body to a doctor that may or may not be planning to kill his wife but, while they seemed to be a perfect fit for part of the mystery, they didn't fit in with all the pieces.

The meaning behind the victim's final words were also a mystery. Were they gibberish? Or, were they a clue? They seemed to be important because the attempt on Bobby's life didn't happen until after he mentioned them but nobody involved with the case seemed to have any idea who Evans was or what the sentence had to do with the murder.

Another thing I liked about this book was the way Bobby and Frankie continued to take somewhat extreme risks to find clues. Frankie faked a car accident to gain entry into a suspect's home, for example, while Bobby impersonated both an attorney and a chauffeur. Considering neither one of them was a professional detective, it was interesting they would take measures like that to solve the murder of someone they never met.

The ending also turned out to be entertaining. I was able to figure out both the killer and the accomplice but, even after doing that, there were still a couple surprises. It was definitely a lot better than some other murder mysteries that were both easy to solve and extremely dull.

Final Opinion: It was an entertaining mystery that I thoroughly enjoyed. I'd recommend taking the time to read it.