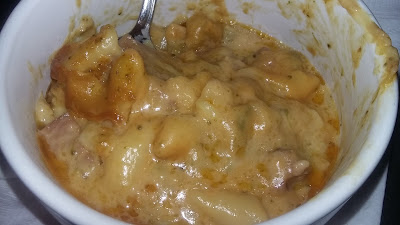 Tonight was skate and dance night for our daughters so, since my wife and I would be out of the house (on opposite sides of town), I decided to pick up something to throw in the slow cooker.

I originally planned on buying one of those frozen slow cooker meals. However, the grocery store I was at apparently decided to get rid of them so I ended up going to Kwik Trip instead and buying a bag of their Kitchen Cravings Macaroni and Cheese.

It was my first time trying this particular product and I wasn't sure what to expect from it. But, it ended up being pretty good.

As planned, I ended up making this in our slow cooker, adding some ham steak and broccoli to give it a little more substance (it did, after all, have to stick with us all night). Since the soup was pre-made (just frozen), the prep work was easy enough. I just needed to thaw it a little bit in the microwave, so it would fit in the slow cooker, add the chopped up ham steak and broccoli and cook it on low. Everything was done by the time I got home from work.

As far as taste goes, I had no complaints. The macaroni and cheese was definitely cheesy and thick. I've had several similar products that tasted really salty. That wasn't the case this time around and I enjoyed every bite.

The thickness of the cheese also made this product very filling. I barely made it through the first bowl and it stuck with me throughout my daughter's skating lessons tonight. It also complemented the ham steak and broccoli really well.

Probably the only negative thing I would say about this is the macaroni did wind up getting a little soggy/overcooked. As a result, I wouldn't recommend making it that way.

Final Opinion: This turned out to be a well-spent $7.99. Making it in the slow cooker probably wasn't the right choice, but I would definitely buy it again.