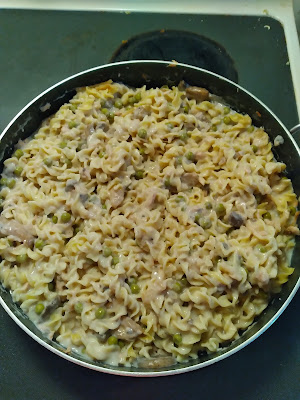 I had some time to try something new last night while my wife and daughter were at martial arts. It's been a while since I've had tuna noodle casserole because it's usually my wife who makes that and she hasn't had much time to cook lately so I decided to attempt my own stovetop version of it.

Everything was prepared in the same pan, minimizing the number of dirty dishes.

3 cans of cream of mushroom soup

I started out boiling the noodles in the skillet until they were done then drained them. After that, I mixed in all the other ingredients except the onion fries and cooked my creation until it was fully heated, and the soup thickened a bit. I then added the onion fries and seasoned it with garlic powder and black pepper. It turned out really well.

Just to warn you, I tend to cook for an army because I like having plenty of leftovers for lunch and this did make enough for dinner and roughly 6 additional generous servings. In total, it took about a half hour to make, and the ingredients cost me less than $15.