Book Review: The Man Who Broke Capitalism by David Gelles (2022)

Synopsis: This non-fiction book talks about Jack Welch, who took over as CEO of General Electric in 1981 and fundamentally changed the company by creating a policy that maximized investor profits at the expense of the employees, a model the author argues destroyed capitalism when other companies followed suit. 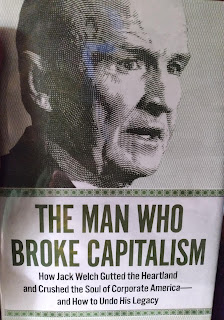 Review: I came across this book at my local library a few days ago and, while it isn't something I probably wouldn't normally read, decided to give it a try. Overall, I have to say it was an interesting book.
I always read books like this with a bit of a grain of salt because you don't always know the author's motivations. However, in this case, I do think Gelles made some fundamentally sound arguments regarding General Electric's policies in the 1980s, effectively changing both that company and similar companies by getting away from being a place where people could expect life-long employment and top-level compensation and benefits to being at risk of a layoff because the company wanted to maximize profits.
I also found it interesting how and why (at least according to the author) GE went from being a company that focused solely on manufacturing to one that diversified and eventually became more focused on building wealth by acquiring other businesses and downsizing their workforces to maximize the return on investment. This included purchasing broadcast media and becoming involved in the financial/banking world. The author's comparisons to GE and other companies that followed the same pattern was fascinating.
I also thought Gelles arguments about how to fix capitalism, while somewhat controversial, seemed fundamentally sound. I'm never going to claim to be a financial expert but things like focusing more on long-term goals rather than short-term profits, training workers so they can keep up with changing technology and strengthening anti-trust policies made sense, at least on paper. If nothing else, it did open my eyes a bit regarding the corporate world.
Final Opinion: It's an interesting read that I was glad I checked out from our library and a book that is worth taking a chance on.
My Grade: A
books business David Gelles finance general electric history books jack welch non-fiction