Synopsis: This non-fiction book tells the story of the bald eagle and how the bird intertwined with America's history and became part of American culture. 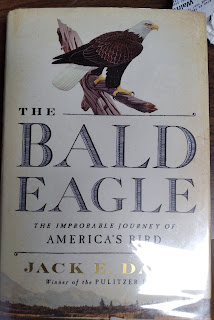 Review: I saw this book in the new books section of our library a few days ago and, since I didn't have any books I planned to check out, decided to give a try. It ended up being a good choice.

At first, I wasn't really sure what to expect from this book. However, it turned out to be an entertaining and informative narrative about the bald eagle and its influence both on ancient North American civilizations and the fledgling United States, even becoming part of the nation's seal following the Revolutionary War. The book also delves into the things that put the bald eagle on the endangered species list and the efforts that were made to revive the population.

I think the thing that I enjoyed most were the bits and pieces of information throughout the book that really surprised me. For example, I never knew the bald eagle wasn't officially our national bird (the United States doesn't have one). I also thought the story about Benjamin Franklin wanting the turkey for our national bird was true, something the author does a good job disproving.

Even some of the scientific facts about the bald eagle surprised and interested me. I, for example, never realized they were known for stealing prey from other predators, something that nearly disqualified it from being on the national seal because some of our founding fathers found that offensive. Frankly, it's something I'll probably think about every time I see one now.

Final Opinion: Some of the chapters are kind of long and could have likely been broken up a bit more. However, the book is informative and interesting and is something I would recommend taking the time to read, whether you're just interested in the bird itself or learning a little more about our nation's history.