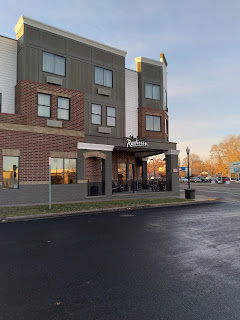 I'm not a huge fan of staying at hotels but have been doing so more frequently now that my oldest daughter is in college. We first stayed at the Radisson Hotel, located at 100 Spring Street in River Falls, WI, a few months ago, when she toured the college campus there. We've been staying at a different hotel each time since but decided to switch things up on our last visit. It will be our first choice from now on.

Cost-wise, this is slightly more expensive than the other hotels in the area, but not by a whole lot. This last visit, for example, it was about $5 more. It's worth the extra money.

For one, the location couldn't be better. It's right across the street from the college campus and within easy walking distance of one of the grocery stores and most of the downtown businesses. The hotel also has a parking garage, something that is very handy when it's cold outside.

The rooms are much larger than the other hotel we've been staying at. A room with two queen beds is large enough for four people to move around in without feeling crowded and comes with both a desk and a comfortable chair/foot stool. The bathroom is also large, with a sink inside (I hate rooms that make you wash your hands in the room itself) and everything was both clean and in working condition (the last hotel we stayed at had a broken sink and broken lock on the outside door both times).

I didn't take advantage of all the amenities but there is access to a fitness center and swimming pool and the continental breakfast (which I did take advantage of) was much better than most, with choices that included eggs, bacon and waffles. We didn't dine at the restaurant connected to the hotel because we found dinner at the grocery store instead, but it is a convenient option, especially during the winter.

I thought the hotel was quieter than most. I could hear some guests moving around during the night, but it wasn't anything that prevented us from getting a good night's sleep. At minimum, the room heater was a lot quieter and easier to control.

One word of caution with this hotel - it does charge a $50 security deposit on top of the room charge. This is refunded a couple days later as long as you don't destroy the room but is something you do need to keep in mind when budgeting because there's no mention of it when you book the room on the Radisson web site (they did recently drop the price. When we stayed there the first time, it was $150).

Final Opinion: There are four hotels in River Falls to choose from and, while this one is slightly more expensive, it is the one I would recommend.