I Got a Bit Creative in the Kitchen Last Night 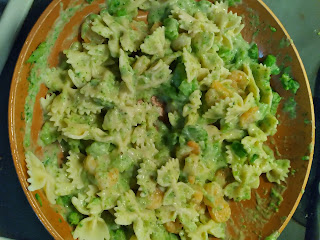 Creativity isn't always my strong suit when I cook since I tend to stick with meals I've made before. However, I was at the grocery store yesterday evening and had originally intended to buy a frozen skillet dinner (since my wife/daughter had martial arts classes until 8) and, after seeing the price of those, decided to make one from scratch.

Cost-wise, there wasn't much difference in price. I would have needed to buy two pre-made skillet dinners since one just isn't enough for everyone and that would have cost me $15. The ingredients were around $16 (and I could have probably come in at less money had I gone with a different brand of shrimp).

I fried the broccoli and shrimp together until the latter was fully cooked. I then boiled the elbow pasta separately and added about half the 1-pound box to the pan (saving the rest for another time) and mixed them with the Alfredo sauce. It was a simple meal that turned out to be pretty good and gave me enough leftovers for two more servings. I'll probably be attempting like this again sometime.