Synopsis: Even though Marguerite (Meg) Steinheil didn't consider herself a prostitute, she rose to prominence in 19th century France by performing sexual favors for prominent men in exchange for them purchasing her husband's paintings and even entered a love affair with France's president. When her husband and mother were murdered, and she was found tied to a bed, authorities suspected she was lying about what happened and was possibly involved. However, proving that would result in a scandal that could potentially embarrass the country. 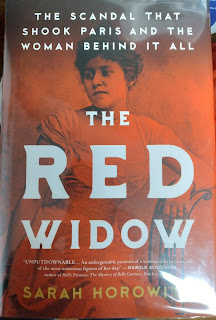 Review: This was a book I randomly checked out the last time I was at our local library. It wasn't anything I had heard about previously but looked somewhat interesting, so I figured I'd give it a try. It ended up being an entertaining read.

There were a couple things that I found interesting about this book. One of the main ones was how Meg was put in a position where she effectively needed to be the breadwinner because her artist husband wasn't doing enough and ended up finding a strange balance where she was selling her body but, due to a technicality (she wasn't getting paid directly) still managed to be accepted in the upper-class society rather than be looked down on like a common prostitute.

The author also does a good job explaining the attitudes toward sex during that era, with married men pretty much expected and encouraged to sleep around while their wives experienced a double standard. It made Meg almost seem like a feminist icon in comparison, especially considering who she wound up sleeping with and the fact she made almost no effort to hide it from her husband.

I also thought the part about her husband and mother's murder was entertaining. I love a good mystery, and this is a real-life one that has yet to be solved. On the surface, it would seem like Meg was responsible and the evidence certainly shows she was lying about what happened. However, as the author points out, the murder of her beloved mother throws a wrench into that theory, along with the fact there were plenty of less obvious ways she could have killed her husband.

Of course, the investigation itself is also intriguing. I was fascinated by the way the authorities went out of their way to "investigate" the crime without actually trying to solve it and even took steps to avoid disproving her story or accidentally causing her to confess. Reading about her mucking things up by changing her story multiple times and even framing a servant in an effort to convince people she wasn't the killer seemed almost humorous (though I could sort of understand why she did it) because they were practically trying to force a "get out of jail free" card in her hand and she didn't want it.

Final Opinion: I had never heard of Marguerite Steinheil before reading this book and, once I did, I had a hard time putting the book down. This is worth taking the time to read if you get a chance.