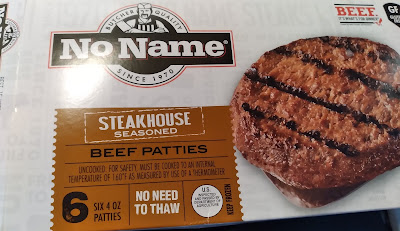 I've had this brand in the past, but it's been at least five or six years since I last purchased it because I'm a guy who likes to shop for value and can usually find a better deal with other brands. However, I was at the store yesterday evening and discovered the No Name patties happened to be the most affordable choice and picked up a box.

I made these on the grill and the first thing I noticed about them is they weren't as greasy as many of the other beef patty brands I've purchased. Yes, there was still some grease and a few flames as a result of that grease. However, the flame ups were much more sporadic, and I didn't end up with an out-of-control grease fire, as has happened multiple times before.

Another thing I noticed about these burgers while grilling them is they didn't shrink nearly as much as other patties. They were still smaller than they were when I put them on the grill but were large enough to fit the bun perfectly. In comparison, I've had plenty of others that shrunk to the point there was much more bun than burger.

The patties had a pleasant taste to them. I don't know if I would describe it as anything overly special and I've definitely had other brands that were just as good. They were, however, enjoyable enough for all six patties to be eaten in one meal. Even my daughter, who usually is only good for one hamburger, had a second one. This, of course, made me a little disappointed there weren't more in the box since that meant I didn't have leftovers for lunch.

Final Opinion: I still probably wouldn't buy these if they were considerably more expensive than other brands but do think the quality is good enough to justify picking this brand if it is only a dollar or so more.