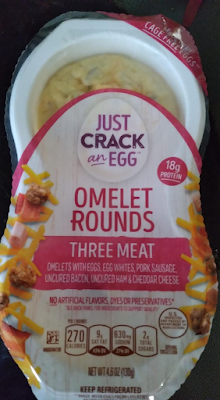 I've seen these both at the store and advertised on TV and was interested in giving them a try. I finally did that this weekend, when I found them on sale at one of our local grocery stores for $1.50. They exceeded my expectations.

The first thing I noticed about these was they were very easy to prepare. It was as simple as removing the plastic from the package, microwaving the omelets for a minute and letting it sit for two minutes. Compared to plenty of other pre-packaged breakfast items, I thought that was very convenient, something that would make these a great option if I'm in a hurry.

Taste-wise, I have no complaints, other than they could have maybe used a little more cheese. The egg itself had a good flavor and the three-meat stuffing was delicious with the just right amount of seasoning to give it taste without being too spicy.

The omelets also proved to be surprisingly filling. They didn't look like much, and I thought I'd still be hungry. However, that wasn't the case, something else that would make these a good option for when I'm in a hurry.

Final Opinion: I've seen these sold at some stores for around $5 and I'm not sure I'd spend that much but, if I were to find them at around the same price I paid, I would definitely buy them again.