Synopsis: After serving a 4-month stint in Afghanistan with the Military Intelligence Corps, Jason Kander returned home to Missouri and, with his wife, Diana, at his side, threw himself into a political career and, by 2017, was preparing to run for President of the United States. However, Jason had a dark secret he didn't even know about, post-traumatic stress syndrome that was controlling his decisions, ruining his marriage and putting his life in danger. 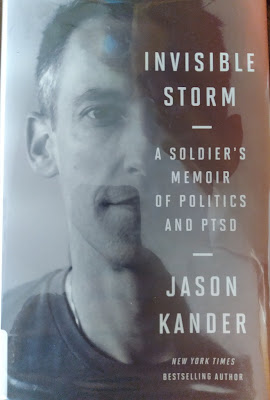 Review: I walked past this book at our local library this past Saturday and, while I didn't originally pick it up, wound up grabbing it on my way to the checkout desk.  Normally, I'll read a book one or two chapters at a time but, on occasion, come across one that I can't put down. This was one of those books.

Like many people, I was familiar with the term PTSD but, having never served in the military, didn't fully understand the mental illness. It's easy to say this book both taught me a lot about the illness I never knew and was a real eye opener for me.

There were a couple things that really stood out for me when reading this book. One of the main ones was how the author didn't hold back when describing how the disease affected him, whether it was working through the night just to avoid falling asleep and having night terrors or being overprotective of his wife and son to the point he would walk through the house checking every room while holding a gun.

I also thought the part about him wanting to return to combat, as a way of fighting his demons by tying to find closure, was intriguing. As an outsider looking in, it sounded like the exact opposite of what he needed but, at the same time, I could understand his logic. It made me wonder just how many veterans made the exact same decision for the same reason.

Another part of this book I found interesting was the way it also included Diana's point of view, both when dealing with her husband's PTSD and, eventually, her own. I honestly never thought of PTSD as something that could be contagious until reading this book and, again, it was a real eye opener. By the time I was done reading this, I was also honestly very surprised their marriage survived all of it since there were plenty of times when she could have chosen to walk away, and I don't think anyone would have thought less of her.

Final Opinion: This is a very personal and intriguing book that, as I mentioned before, I couldn't put down once I started reading it. I hope more people take the time to read it because it is a subject I think needs to be discussed a lot more than it is.