Synopsis: After a series of small acting parts, Jennette McCurdy finally got her big break by being cast on the Nickelodeon series iCarly. However, while her acting success resulted in financial security, being famous wasn't Jennette's dream and acting was something she only did to please her overbearing mother. Her autobiography provides details of this and the ways she was affected even after her mother died. 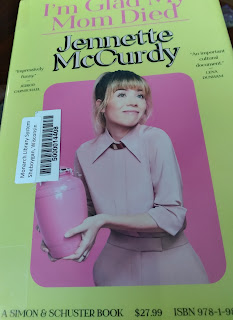 Review: Having two daughters, I was familiar with Jennette McCurdy both from iCarly and the spin-off series Sam & Cat and I'll even go so far as to admit she was probably my favorite from both shows. As a result of this, when I heard about her autobiography, I was intrigued.

To be honest, I wasn't really expecting much from this book when I was finally able to get a copy from the library. A lot of that was from the skepticism I'm sure I shared with plenty of others regarding just how bad off she was. I mean, sure acting might not have been her dream, but I was sure she also wasn't crying whenever she cashed the paychecks. However, after reading the book, I have to admit it really surprised me.

There were a couple things that really stood out for me when reading this book. The first was, despite the title, it was clear she loved her mom. Some of the things she had to endure, such as her mom insisting on showering with her (even as a teenager) and performing breast and vaginal exams were fairly disturbing, but the book described it in a way that also made it easy to tell her mom might not have been able to realize what she was doing was wrong.

The other thing that stood out for me was the way the author didn't hold anything back when describing what she faced as a child star, whether it was the eating disorders, the creepy show producers or the boyfriends who obviously (at least to an outsider) were just as bad for her as her mother's influence was. The last one was actually a lot sadder to read than expected, especially when she thought she finally found the right guy and later discovered he had his own personal demons to deal with.

I can't even say this book was about her overcoming all the abuse she received because I honestly didn't get that impression. If anything, it sounded like she is making progress but still has a long way to go and that, alone, made it easy to see why she quit acting completely once she had an opportunity to.

It also made it easy to understand why so many child stars struggle once they become adults. I'm sure her story isn't unique, it's just one of the ones being told.

Final Opinion: Once I started reading this book, I had a hard time putting it down. Some of the material is a bit graphic and some people might be uncomfortable reading it as a result. However, if you get the opportunity to, you should still take the time to read this book.