Synopsis: Well-renown surgeon and conservative icon Ben Carson gives his view on race relations in America as well as subjects like critical race theory and George Floyd's death at the hands of police officers. 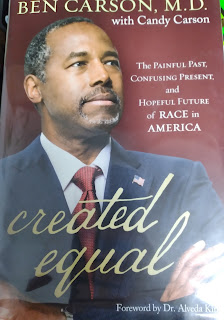 Review: As a moderate independent, I try to keep an open mind and read books/articles written by people from both ends of the spectrum. That's why, when I came across this book at the library, I was intrigued enough to check it out.

Since I was familiar enough with Ben Carson to know his basic political views, I pretty much knew what to expect from the book. However, I also hoped a conservative, black, doctor would offer a slightly unique viewpoint about racism in America and how to solve it. Unfortunately, that turned out not to be the case.

To be fair, there were a couple things that did stand out for me when reading this book, such as his stories about the racism he faced when he was a child and how his white teachers hated the fact he was doing better than the white students and even tried to sabotage him. I also thought Carson made a valid point regarding race relations and the need to acknowledge how they have improved rather than just focusing on what still needs to be done.

Unfortunately, other than those and a couple other specific things, the book read a lot more like the Republican Party manifesto than anything overly unique, especially when discussing things like CRT and the "defund the police" movement. I'm not saying I necessarily disagree with his opinions; I'm just saying most of the book was the same arguments I've heard from plenty of others, and I was more than a little disappointed by that. Like I said, I was hoping for a unique perspective, not the same re-hashed opinions wrapped up in a different body.

Final Opinion: There's obviously an audience for this book since it is a #1 best seller. However, if you are looking for unique ideas, it's really nothing memorable.