Synopsis: Elizebeth Smith Friedman spent most of her life using her code breaking talents to help the United States government stop both foreign spies and organized crime gangs. However, both because of the classified nature of her work and her gender, many of her contributions went unrecognized. This biography tells her story. 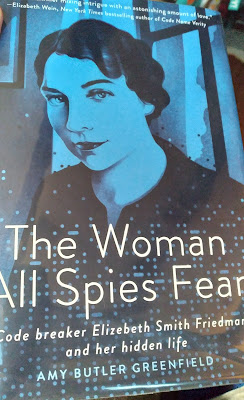 Review: As has been the case multiple times before, I didn't plan on getting this book when I went to my local library but decided to check it out after seeing it on one of the shelves on my way to the checkout counter. As it turns out, not only did I enjoy this book, I couldn't put it down once I started reading it.

There were a couple things I found interesting about Elizebeth's life. One of the main ones were the numerous challenges she had to overcome. This included her first boss, who did everything in his power (including intercepting her mail) to prevent her from moving onto something better, the fact she was a working woman at a time when married women weren't expected to hold jobs, and being overshadowed by her husband, who was also a talented code breaker.

The last one was probably the most fascinating of these. On one hand, she was in love with, fully devoted and proud of her husband. On the other, he went from being her partner to her rival. I especially thought the part about them not being able to discuss their work with each other because of it being classified and their individual employers (she worked for the Coast Guard and Navy while he worked for the Army) were very uneasy about the fact they were married.

While the book obviously focused on Elizebeth, I thought it did a good job of giving just enough background information about her husband to make it easy to see how, despite the obstacles, he was a great match for her. This includes him being fully supportive of her career, including hiring help and/or staying home with the kids so she was able to travel for her job. In all honesty, it was an unusual love story that I wasn't expecting given their circumstances and careers.

Another thing I liked about this book was how it would take time to teach basic code breaking. This was interesting in itself, but it also made it easier to understand whenever the book talked about what Elizebeth was doing. I wish more books would do that.

Final Opinion: This was a random choice that turned out to be a great one. I recommend taking the time to read it.