Synopsis: Francois Clemmons played the role of Officer Clemmons on Mister Rogers' Neighborhood for 25 years and became a household name as a result. This autobiography tells the actor's life story, including the abuse he received as a child, his struggles due to racism and having to choose between his homosexuality and his career. 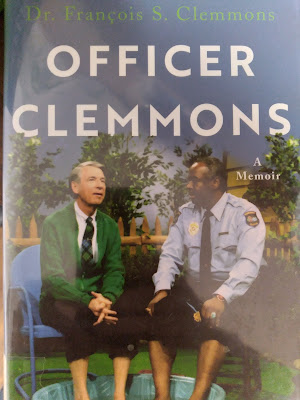 Review: Since I, like many people, grew up watching Mr. Rogers' Neighborhood, I have been interested in reading this book ever since it first came out. I was finally able to get a copy of it through our library system and read it over the weekend. It did not disappoint.

The thing that surprised me about this book was, even though the author's relationship with Fred Rogers was a big part of it, it ended up being only part of the story. Clemmons also chose to spend a great deal of time talking about his estranged relationship with his family (over his sexuality) and the people who filled in where they didn't, whether it was a family friend who took him in to protect him from an abusive stepfather or another family that was willing to let him explore his homosexuality.

His frank talk about the reality of him being a gay black man in the 1960s and 70s was intriguing. The racism alone prevented him from getting coveted roles or even getting support from his school guidance counselors (who wanted him to be a plumber or tailor because of the color of his skin). He even spent some time talking about how he felt playing a police officer on a kid's television show when he, himself, had been raised not to trust the police.

When he did talk about Rogers, his description really brought the man back to life. The serious discussion Rogers had with him about his sexuality was on point, showing a man who didn't judge but also knew the realities facing Clemmons if his secret were to get out. It sounded a lot like a discussion I would have with my own kids regarding their choices - it's their choice to make but they should be aware of the potential consequences. It helped me gain a lot more respect both for Rogers and Clemmons.

One thing I do wish this book would have spent more time on was Clemmons' sham marriage to a high school classmate. He covers it enough to give the reader and idea of how unhappy everyone was but, since it was one of the more intriguing parts of the book, I still wish it would have given more details. Frankly, I kind of felt sorry for his wife considering she didn't know his secret and married him because she really was in love with him.

Final Opinion: The book wasn't quite what I was expecting, but I mean that in a good way. It's an interesting autobiography that I would recommend taking the time to read.