Book Review: I Marched with Patton by Frank Sisson with Robert L. Wise (2020)

Synopsis: At the age of 18, Frank Sisson enlisted in the US Army and was shipped off to Europe to fight in World War II as part of an artillery unit serving under General George Patton. His autobiography gives details of that service. 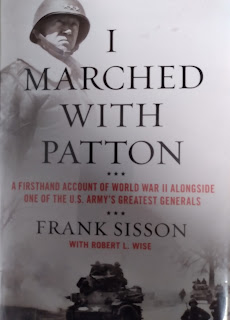 Review: I came across this book while at a bookstore a couple weeks ago. Since I wasn't sure if it would be something I'd enjoy, I left it on the shelf but, a couple days later, was able to find a copy at the local library. I finished the book last night and, overall, I'd have to say my opinion of it was a bit mixed.

The book does have some intriguing information about World War II. The details he gives about General Patton weren't anything I didn't already know, especially since I've seen the movie Patton multiple times. However, some of the more personal details of what he experienced were fun to read.

For example, the part about 650 men having to share four toilets isn't something you're going to find in your average history book, and I admittedly chuckled when he talked about the sergeant needing to order a trench because of a food poisoning incident. His detail about having to run communication wires while facing the danger of snipers, hidden machine gun nests and airplane assaults. It gave a good picture of what the men faced, even in areas that had already been reclaimed from the German army.

I do feel the book should have focused more on those stories and a bit less on trying to tie his exploits in with General Patton. It would have been one thing if he had been Patton's personal chauffeur or something and could have given some intimate details about his relationship with the general but, as I mentioned, most of his Patton details were things I could have gotten from a variety of other sources. In fact, the writer himself was getting a lot of the details from secondary sources, whether it was via a newspaper he read or learning the information through another soldier.

I'm also going to say I wasn't a huge fan of the way he ended up portraying his teenaged sweetheart later in the book, making her seem like she betrayed him despite years of absence (starting before he even went to war) and sharing some personal information about her that honestly should have been her story to tell. Frankly, it felt a little petty and probably shouldn't have been included.

Final Opinion: It's not really a book I'd recommend for a casual read but, if you're studying World War II, writing a term paper, etc., it does have quite a few details you likely won't find anywhere else and I would recommend it for that reason.