Book Review: The Case of the Mischievous Doll by Erle Stanley Gardner (1962)

Synopsis: Dorrie Ambler comes to Perry Mason with an unusual request. She needs both him and Paul Drake to examine her appendix scar so they can make a positive identification because she believes someone is trying to set her up as a patsy for Minerva Minden, an heiress that bears a striking resemblance to her. Minerva, however, has a different story - Dorrie is trying to blackmail her. When Dorrie is apparently kidnapped and a body is later found, Minerva is charged with murder and Mason decides to defend her. 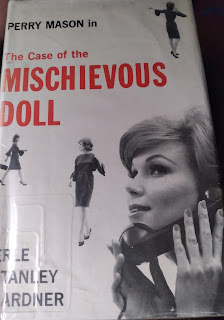 Review: I've read quite a few Perry Mason novels and some are more memorable than others. This one was definitely one of the more unusual ones.

I think the thing I found most interesting about this book was the way it was unclear which of Mason's clients was the one telling the truth. Both told tales that seemed plausible but also a bit untruthful and it was difficult to figure out which was trying to pull the wool over Mason's eyes and why.

I also liked how this book featured one of my favorite characters, Det. Tragg. The way he both helped and opposed Mason at the same time was interesting because he seemed like he was giving the attorney a fair shake but, at the same time, was staying one step ahead.

Unfortunately, while the premise was intriguing, I did think the murder mystery itself wasn't overly difficult to figure out, especially when it became pretty obvious what Dorrie was really hiding from Mason. Once I guessed at her real identity, the rest of the murder case became somewhat predictable, though I do have to admit Mason's courtroom trick to get a confession from the real killer was a stroke of genius.

I think my biggest problem with the case, however, is Tragg really should have figured it out before it ever went to trial, especially since he had access to the defendant's fingerprints. It's either a very large plot hole, or I am expected to believe Tragg could be on-point for the entire case and completely miss a very obvious clue.

Final Opinion: I thought the book had a good premise and the whole Minerva/Dorrie thing was entertaining. However, while I didn't hate this book, I do wish the murder mystery would have been slightly less obvious.