Book Review: Kiss Me Like a Stranger by Gene Wilder (2005)

Synopsis: Actor Gene Wilder tells his life story from his childhood in Milwaukee through his battle with cancer, sharing stories about the people he met, the women he slept with and the demons he faced while becoming famous. 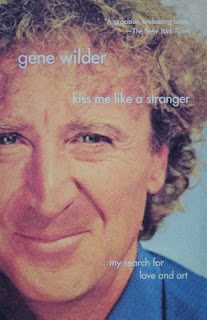 Review: I was reminded about this autobiography when I came across an old interview and Gene Wilder (always one of my favorites) mentioned it. I was intrigued enough to take advantage of my local library's book exchange service and ask them to obtain it for me. I read it over the weekend and am glad I did.

I've read quite a few autobiographies in my lifetime, but this was the first time I remember reading one and hearing the author's voice reading the words to me in my head. In fact, had I not known anything about the book before reading it, I am confident I'd be able to tell you who wrote it because it was written in a way that reminded me of how Wilder sounded when he talked.

I think the thing that surprised me most about this book was, even though it was written by a comedian, the book was serious and somber. I honestly almost had to quit reading when I reached the part about him being sexually assaulted and beaten while in military school because it was so depressing (especially when his ill mother found out and felt guilty). Meanwhile, the part about his "demon" seemed like something that would end up being humorous at first until he made it easy to understand why he didn't consider it a minor thing.

The three chapters he dedicates to his wife, Gilda Radner, and her battle with cancer were heartbreaking, especially when he talked about how it affected their relationship and nearly resulted in him having an affair. He seemed to tell the story with raw emotion, making it easy to relate to it.

One unique part of the book was his occasional switch to an interview format with his former therapist, with her asking questions and him answering. At first, I wasn't sure what to think about it but, when this was put in context with the overall impact she had on him, I found I liked it and kind of wish he would have done more of that later in the book as well.

My only real complaint about this book is I wish he would have given more detail about his movies and various other projects and slightly less detail about his trysts with various women. Some of the things he discussed might have been a little too personal, including the part about one of his girlfriends having an abortion, and didn't really add a whole lot to the overall narrative. In comparison, they way he created characters in Young Frankenstein with specific actors in mind and the legwork he did to learn about deaf and blind people before writing the script for See No Evil, Hear No Evil, at least gave some insight into his creative side, something I personally found more interesting.

Final Opinion: As I said, Gene Wilder was always one of my favorites (if not THE favorite) and this book didn't do anything to change that opinion. I would highly recommend taking the time to read it.