Book Review: The Case of the Deadly Toy by Erle Stanley Gardner (1958)

Synopsis: When Norda Allison witnesses the sadistic way her fiancé, Mervin Selkirk, slaps his son Robert, she calls off the engagement and, almost immediately, begins receiving threatening letters she assumes were sent by Mervin. She later accepts help from Mervin's ex-wife, Lorraine, and her second husband, Barton, only to find out they plan on using her as a witness in a custody hearing for Robert and, after discovering a printing press in their basement, believes they were the ones who were sending her the letters. She goes to Perry Mason for help shortly before learning Mervin has been murdered and she is the primary suspect. 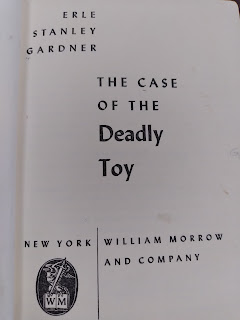 Review: When I first started reading this book, I was somewhat intrigued by both the title and the premise and thought it had a good chance of being one of my favorite Perry Mason mysteries. Unfortunately, after finishing it last night, I have concluded it is the exact opposite of that.

I am always going to criticize a book/movie if I think it is too predictable, especially if it is a murder mystery. This novel, however, went above and beyond that - the point I found I was very confused about why the police even considered Norda the primary suspect when there was so much more evidence pointing to the real killer.

I usually try to refrain from giving spoilers but am going to make an exception in this particular case. Lorraine and her husband had the motive (custody of Robert), they owned the gun that shot Mervin, a witness testified to seeing a woman at the crime scene driving Lorraine and Robert's car, other witnesses testified to hearing a gunshot and seeing Robert cleaning up blood and the couple made arrangements to send Robert (a potential witness) to Mexico right after. Yet it was Norda who was arrested? It almost felt like the only reason she was charged was because Mason was her attorney.

Even with the couple pieces of (obviously planted) evidence pointing to her, I really find it hard to believe the police were that easy to manipulate, especially the normally competent Lt. Tragg. And, since it was obvious it wasn't his client and there were only two other potential suspects, the book was a 15-minute mystery stretched out to a 200+ page waste of my time.

In fact, the only reason I kept reading was I was desperately hoping there would be a surprise twist I wasn't expecting. I can't begin to tell you how disappointed I was when that didn't happen.

Also, at the risk of seeming like I am piling it on, I am going to take a moment to complain about the overuse of one of Hamilton Burger's court room tactics - purposely tainting witness identifications by giving them prior knowledge of what the defendant looks like. I am choosing to ignore the fact this seems like something that should have resulted in some sort of disciplinary action against Burger. Instead, I am going to focus on his decision to continually try this despite the fact Mason has already embarrassed him dozens of times. You would think, by the 58th book, he'd either stop trying it or, at minimum, do a better job prepping his witnesses so they don't spill the beans on cross examination. As it stands, it's something that honestly should have been retired at least 30 books ago.

Final Opinion: Most of the time, even if a Perry Mason book isn't as good as the others, it's still worth reading. This one, in my opinion, is an exception to that. I don't recommend wasting your time on it.