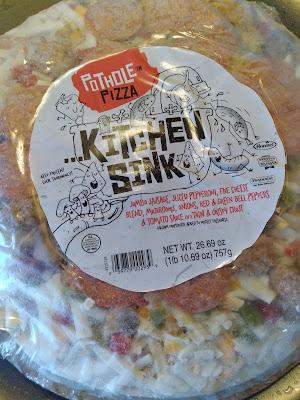 Kwik Trip was running a special on Pothole Pizzas last week, buy two and get a 25 cent/gallon discount on gasoline. Since I knew we would likely need something simple for dinner this past weekend (my oldest daughter graduated high school), I took advantage of the offer. Worst case was the pizza would just stay in our freezer for another day.

I ended up picking out the Kitchen Sink pizza because of the variety of toppings on it, ranging from sausage and pepperoni to various vegetables. Overall, it ended up being a good choice.

Normally, I'm not a huge fan of thin crust pizzas because I rarely feel as though I got my money's worth. That was not the case with this brand. Unlike most other thin crust frozen pizzas, this one was filling, to the point I was feeling full after only two slices rather than my usual four.

A big part of the reason for this was the generous amounts of toppings on this pizza. This was especially true of the sausage, both because of the quantity and the size of the pieces. Basically, there were as many toppings on this pizza as I would expect to see if we were buying a pizza from a restaurant and there aren't many frozen pizzas I can say that about, especially ones that cost less than $10 (this was $8.99).

Final Opinion: This was a frozen pizza that was well worth the money I spent on it, even without the discount on gas. I'd recommend it if you have a chance to buy one.