Book Review: The Case of the Foot-Loose Doll by Erle Stanley Gardner (1958)

Synopsis: After Mildred Joiner's fiancé reveals he is an embezzler and breaks off their engagement, the humiliated secretary withdraws everything in her savings and decides to take an extended trip. She picks up a hitchhiker, Fern Driscoll, only to have Fern Force Mildred's car off the road. When her passenger is killed in the accident, Mildred sees an opportunity to start her life over and steals Fern's identity. However, Fern had issues of her own and, when Mildred finds herself facing blackmail, she goes to Perry Mason for advice, not knowing she will soon be charged with murder. 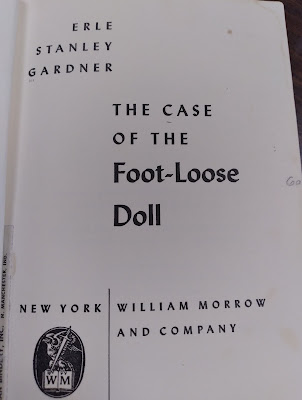 Review: This book, at first glance, seemed a bit thicker than some of the others I've read, and, because of that, I thought it would take me longer to read it. However, I managed to make it through the mystery in a reasonable amount of time, finishing it last night. After reading the final page, I concluded it wasn't my favorite book in the Perry Mason series.

Overall, I thought the case itself had some real potential. Mason's defendant made some bad decisions but wasn't a bad person in general (unlike some of the wealthy clients he's had) and, for the most part, likable. The fact she was caught between a rock and a hard place with her stolen identity did add a little extra to the case as well.

The problem with the book, in my opinion, was the decision to tell most of the story from Mildred's perspective rather than have the reader learn the information at the same time Mason was learning about it. This made the book a little less suspenseful than it might have been had there been some doubt about whether Mildred was telling him the full truth about what happened. This was especially true when he decided to put her on the witness stand. It's something that he pretty much never does, but it didn't have much of an impact because I had already heard her story multiple times by that point.

Also not helping this book was the way it seemed to drag out parts of the case that weren't important enough to justify the time being spent on them. A great example of this was Mason putting Della Street on the stand to prove a case of mistaken identity. Had he simply called her as a witness, it would have been mildly interesting. However, the book spends quite a few pages talking about his decision-making process with that and what he hoped to accomplish - as though there was really any question about his motive.

The ending was also a bit predictable. Yes, there was a bit of a surprise regarding who Mildred really stabbed with an ice pick but everything else matched up with the conclusions I drew before the case even went before the judge. In fact, I'm not even sure why Mason bothered to put his defendant on the stand since it really wasn't necessary.

Final Opinion: As I said, this book had a lot of potential but the overall execution and the decision to tell the reader a good chunk of the story from the defendant's point of view did keep it from being as good as it could have been.