I Found Something Cool at the Library Today

I stopped by the library at lunch (too cold to take a walk) to pick out a couple movies to watch this weekend. As I was walking toward the checkout counter, I noticed the wall of high school yearbooks in the reference section and, since I had some time before I needed to head back to the office, I decided to check them out.

My first plan was to take a trip down memory lane and look through my yearbook (though, truthfully, I don't remember a whole lot about high school, likely partially due to a concussion I received when I was in college). However, seeing their collection went all the way back to the 1920s, I decided to look up a bit of family history instead. 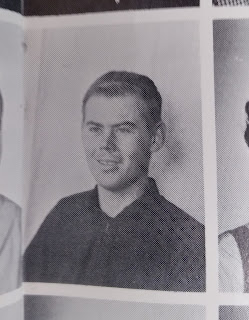 We lost my dad to cancer back in 2019 and, while we have a lot of photos of his life, especially when he was in the military, we did not have many photos of him when he was in high school. The photo above was his junior year. And this one was from his sophomore year: 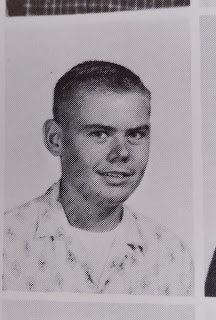 It was a nice pair of gems to dig up in about 10 minutes time. I was unable to find his freshman photo (that yearbook didn't have any freshmen for some reason), and he didn't have a senior photo because he enlisted in the Army at 17 (he later earned his diploma while serving). My next project is trying to find my grandparents' high school photos since the yearbooks do go back that far.
Just in case you ever hear anyone question the value of libraries in today's society, this is a great example of why they are still important.
family family history family tree importance of libraries public libraries