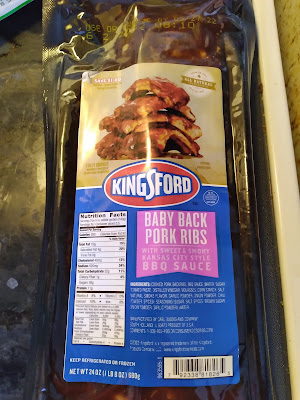 To tell you the truth, this is a product I didn't even know existed until I received a coupon for it from one of our local grocery stores. Since it was only $9.99 at a time when a rack of pork ribs has been running almost double that, I decided to pick them up and throw them in my freezer for a to-be-determined family dinner.

That dinner ended up happening this past weekend. While I had hoped to wait until my grill wasn't buried in snow, I also wasn't in the mood to run to the store to find something at the last second and, after thawing these ribs, ended up making them in the oven. Overall, I have to say I was impressed.

One of the things I found I liked about this product is the ribs were already pre-cooked. This meant I only needed to warm them in the oven and that took less than 20 minutes. Convenience always scores points with me, especially since we have a lot of evenings when none of us has a whole lot of time to cook. Had my gas grill been available, the overall time would have been even less since I wouldn't have had to wait for that to preheat.

I was a little concerned about the barbecue sauce that was on the ribs, not so much for me as much as the rest of the family, which isn't a huge fan of anything too spicy. However, the sauce had a bold but mild flavor that everyone seemed to enjoy, including the kids.

As is usually the case with baby back ribs, the quantity was a bit lacking. There were only enough ribs for each of us to have three each. In hindsight, I should have purchased two packages for my family of four (and probably a pack of hot dogs to go with it, just in case). If I find them on sale again, that will happen.

Final Opinion: This wasn't a product I would normally buy, mostly because, again, I didn't know it even existed. However, after having a chance to try it, I would definitely purchase this again, both for the convenience and the overall quality.