Synopsis: In 1946, a serial killer terrorized the residents of Texarkana, a twin city along the Texas/Arkansas border, resulting in one of the largest manhunts in history and a media circus. This non-fiction book examines the murders and why nobody was ever convicted of the crimes. 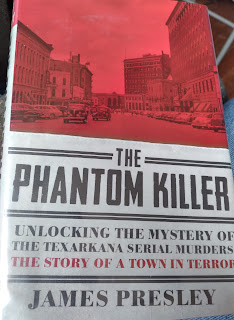 Review: I don't read true crime books very often, preferring fictional murder mysteries. However, even though I wasn't a huge fan of The Town That Dreaded Sundown, the movie did get me interested enough in the real murders to check out this book at our local library. After reading it, I have to admit I found it interesting.

There are a couple things I found I really liked about this book. One of the main ones was the way the author did a great job explaining the details of the murders. The various slayings, ranging from attacks on lovers' lanes to a home invasion, combined with just how brutally the Phantom's victims were killed, made it understandable how the residents would live in fear until the killer was caught.

Another thing I liked about this book was how it also went into quite a bit of detail about the various mistakes and other issues that made investigating the case a lot more difficult. This included one of the bodies being released to the funeral home too early, a failure to connect the murders to an earlier attack that left living witnesses and a discrepancy in witness statements that even left the killer's skin color in doubt. The author also does a great job of pointing out evidence that was not collected (such as a condom), simply because DNA technology didn't exist yet. Honestly, that part made me wonder just how any murders were solved back then without a confession.

Presley's description of the investigation made the sections about the authorities' main suspect even more interesting. The evidence was definitely there, and the fact no other murders occurred following his arrest seem to support their theory. However, because of the lack of damning evidence and/or testimony implicating him, they could never charge him and, instead, had to put him in prison on other charges, meaning the case is still technically unsolved and the killer's motivations are still unclear.

Final Opinion: If you've seen the movie that is based on these crimes, this is a must-read book. In fact, even if you haven't seen the movie, the book is worth taking the time to read.