Synopsis: In the 19th century, American Elizabeth Blackwell, frustrated with the lack of adequate medical attention for women, decided to become a doctor herself. Her uphill battle to be the first woman to earn a medical license later inspired Elizabeth Garrett Anderson and Sophia Jex-Blake to do the same in the United Kingdom. This non-fiction book details their struggles and successes. 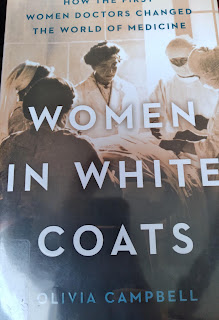 Review: I came across this book at our local library a couple weeks ago and, while it normally wasn't a topic I would find interesting, I was intrigued enough by the description to at least give the book a chance. After finishing it yesterday afternoon, I can honestly say I am glad I took the time to check it out.

I think the best way to describe this book is it does a great job of giving the reader a glimpse of the early days of the women's rights movements in America and the United Kingdom by focusing on three women who challenged the male-dominated medical field. The narrow focus made it easy to see the various obstacles that faced women in Victorian times.

The thing that stood out for me the most was the way the women's male nemeses would, at times, seem like they were almost toying with them. One moment, it would look like the women had succeeded in their goal only to have their dreams dashed as the male-dominated industry found another loophole to keep them from becoming doctors. On top of it, when one did find a way to succeed, like Blackwell, it would actually result in a setback for other women as the men were quick to make sure nobody else would be able to do it.

Some of the measures were even somewhat extreme, including having an entire group of men resign solely to avoid having to give women an opportunity to take their exams. It almost seemed unreal, especially considering most male doctors at the time either didn't understand women's bodies enough to treat them or were unable to give them full medical care because of strict modesty standards. You would think the later would encourage the idea of female doctors.

Another thing I found I liked about this book was the way the author didn't try to make it seem like the first female doctors were saints. While she gave them praise for their accomplishments, including starting their own medical schools and hospitals, Campbell also made sure to describe the ways the women also sabotaged themselves, including disagreements that led to infighting and one of the doctors possibly performing dangerous and unnecessary surgeries in an effort to speed up her cause. A lot of researchers tend to avoid this type of thing but it does make the people they write about seem more human.

I also liked how the book was relatively easy to read. A lot of times, books like this tend to get too bogged down with unimportant details and, as a result of that, I find myself either skimming over pages or skipping full chapters just to get done. I didn't need to do that with this book. I learned a lot and enjoyed reading every page.

Final Opinion: This probably wouldn't normally be my first choice of subject material but the book wound up being informative and interesting. It is definitely a book I would recommend taking the time to read.