Synopsis: This non-fiction book tells the history of knights, their impact on medieval times, and their eventual replacement by firearms. The book provides both a general overview and shares stories about individual knights. 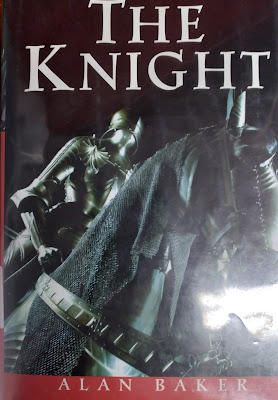 Review: I was in the mood for something from the non-fiction section of our local library a few days ago and, after looking at countless other options, wound up picking out this one mostly because it sounded somewhat interesting. It turns out the book wasn't quite what I was expecting (from the description on the cover, I thought it would be more of a biography) but I still found it to be an entertaining read.

Alan Baker does a decent job of providing a basic overview of knights and their impact throughout history. He starts with a lot of the basics, including a chapters about the equipment the knights used and how the concept of chivalry came about and was applied. At the same time, he mixes in some first-hand historical accounts relating to specific knights, something that helps bring some of the information to life.

One thing, in particular, I found interesting was the play-by-play account of an actual medieval joust, describing the participants and the outcomes of their contests. It was intriguing, especially when some of the contestants would insist on taking on several knights at once, something I honestly thought only happened in the movies.

The chapter about the Knights Templar and similar other organizations was also an interesting read. Baker does a good job of summarizing the rise and fall of the Templars in only a few pages and makes it easy to draw comparisons between them and other groups, like the Teutonic Knights.

I also found myself somewhat interested when reading the chapter about castles because I ended up learning a lot I didn't know, especially when it came to the different types of fortresses that were used in medieval times and when they would be expected. In fact, overall, I was kind of surprised about just how much I learned from a book that was only about 200 pages long.

Final Opinion: I was kind of disappointed it wasn't more of a biography but it did turn out to be an entertaining and educational book, both about knights and medieval times in general. I would recommend taking the time to read it.