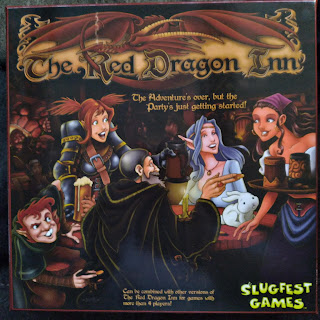 While looking for Christmas presents for the family, I took the time to do some research on some board games, so we could try to spend some more quality time together before my oldest daughter goes off to college next fall. This particular game (which is more of a card game than board game) looked somewhat interesting so I wound up ordering it as a present for the family. We had an opportunity to play it last night and it turned out to be worth every penny.

The games concept is a fairly simple one. You and your friends are at an inn, drinking and gambling. If your character gets drunk to the point they pass out or if they run out of gold, you lose. And, of course, your "friends" can help you out by spiking your drinks, stealing your gold, cheating at cards, etc. We found it entertaining because of the laughs we ended up having while playing it.

At first, I wasn't sure how complicated this game would be because the instructions were a little hard to follow. Once we started playing it though, the instructions made a lot more sense and even my youngest daughter (12) understood how to play it by the time we completed the first game (which she ended up winning).

The game is fairly fast-paced. The first time we played it, it took about an hour for someone to win. The second time took about 40 minutes. I liked this because games that take a super long amount of time do tend to get dull after a while and, at least in my family's case, it's always nice to be able to play more than one game on game night.

Another thing I liked about this game is it can be played with as little as two people (for nights when my wife and I want to play it without the kids) or has the option to play with more than four people by buying some of the expansion packs, making it a potential party game. In fact, I am already looking at some of the expansions.

Final Opinion: This game more than lived up to my expectations after I bought it. I can see it becoming a regular family night activity, especially if we add some of the expansion characters.