Book Review: Draw: The Greatest Gunfights of the American West By James Reasoner (2003)

Synopsis: This non-fiction book shares details of the various gun battles that took place in the American West, focusing both on outlaws and lawmen that either become legendary or were largely forgotten. 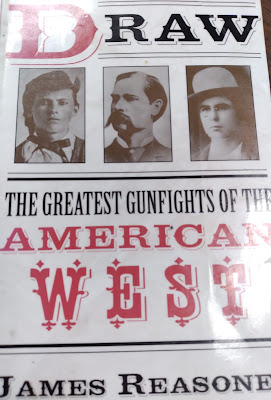 Review: I came across this book at our local library a couple weeks ago and, even though it was a subject I didn't have much interest in, decided to check it out anyway. As it turns out, I enjoyed this book a lot more than expected.

The author does a good job of mixing historical fact with storytelling, making it seem almost as though he was watching the gunbattles in person and making the various participants seem very much alive. This made the book a lot easier to read than if it was just a bunch of facts being written out on the page.

I found I was impressed with the way the author also managed to be mostly unbiased when discussing the outlaws, focusing on their actions without necessarily painting them as heroes (as a lot of movies and books will do). In other words, even when he was pointing out daring escapes, etc., he never forgot they were criminals.

One thing that really surprised me was how I found all the stories interesting. Normally, I'll read a history book like this and will find myself skipping over parts out of boredom/lack of interest but that didn't end up being the case this time around.

That being said, there were some stories that really stood out versus others. In particular, I found I thoroughly enjoyed reading about the Dalton Gang's failed attempt to rob two banks simultaneously, the shootout between the Doolin Bunch and U.S. Marshals that left several innocent bystanders dead, and three of Butch Cassidy's desciples screwing up a bank robbery so badly, it sounded like something out of a comedy movie. I actually ended up reading that last one twice.

Final Opinion: Again, it's not a subject I normally would find myself interested in, but this book wound up being a fun read and is a book I would recommend even if you aren't normally interested in reading history books.