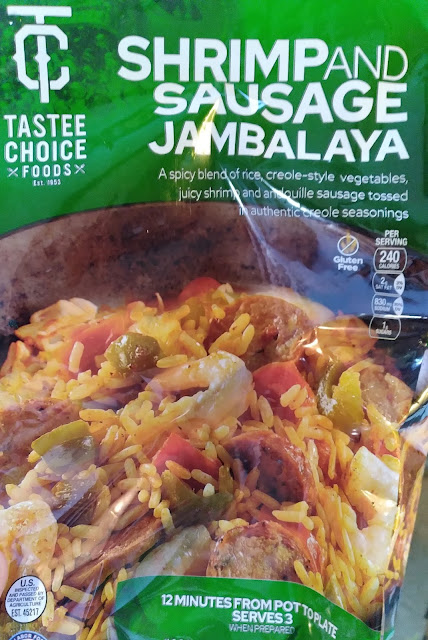 With school back in session and both of us working again, my wife and I still need to get ourselves back into a routine when it comes to planning dinner. As a result of this, we needed to figure something out at the last second and neither of us was in the mood to thaw something from the freezer. Since the kids had already eaten at their grandmother's, I decided to just pick up something at the store. After walking around for several minutes, I ended up with this in the cart.

The primary reason I picked this particular frozen skillet dinner ($6.99) versus several other choices was because it had the least amount of steps. Frozen dinners are meant to be convenient. If we have to go through a long process and prepare certain things separately (as is the case with a surprisingly large number of skillet dinners) then we might as well just make something from scratch. This dinner, in comparison, only had three steps and none of them were overly complicated.

Preparing the dinner proved to be as easy as advertised. My wife got it started while I was getting changed out of my work clothes and it was ready to be eaten by the time our youngest daughter finished up the last few minutes of the cartoon she was watching and we had the livingroom couch to ourselves. At minimum, it took less time to prepare this meal than it would have taken to thaw out a steak.

As far as taste goes, I had no complaints. The food smelled a bit spicy when she was cooking it but ended up being relatively mild without being bland (another problem with many frozen dinners). A homemade version of this probably would have been better, but that's to be expected when you are buying something solely for convenience.

The dinner proved to be filling, though my wife and I did have to go back for seconds. I would describe it more as a light dinner though - good enough for when you need something to eat later in the evening but maybe not filling enough for it to be an early dinner unless you plan on snacking later.

My only real complaint about the jambalya is, while it did have a surprising amount of shrimp for a pre-packaged dinner, there wasn't much sausage in it. I think, between my wife and me, we found about four pieces total. It's not a huge deal but, without it, this was more of a shrimp stirfry than jambalya.

Final Opinion: Overall, I am going to say this wasn't a bad dinner choice. It was relatively affordable, offered convenience and, while it definitely wasn't as good as homemade, had a decent enough taste to make it enjoyable. I'd recommend it if you are looking for something to make as a last-second dinner for two.