Synopsis: By the 1940s, Hedy Lamarr was a successful actress in Hollywood, known for her beauty. In her spare time, however, she was an inventor. When World War II broke out, Hedy, along with composer George Antheil, teamed up to invent a weapon that could be used against the Nazis and, instead, invented a technology that is still being used today. 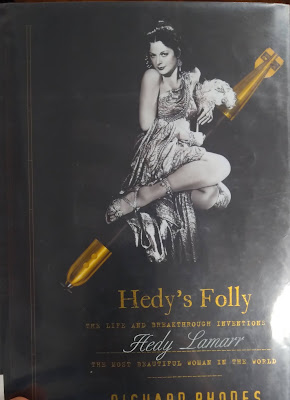 Review: I came across this book while walking through the stacks at my local library and, since I am a big fan of Hedy Lamarr and knew a little bit about her inventing hobby, decided to check it out. It turned out to be an interesting read.

The book gives a fairly detailed account about both Lamarr and Antheil's lives before their paths crossed and they became a team. It also gives a great deal of detail about their invention (a radio-controlled torpedo that couldn't have its signal jammed), the difficulty they faced getting it approved by the military and how the technology wound up being used with various other inventions, including cell phones.

The story about Hedy escaping her first husband, Austrian weapons manufacturer Friedrich Mandl, was one of the most interesting parts of the book and something that could have been a book/movie in itself. It's too bad most of the story is unknown because I would have loved to have learned what steps she took and who was involved with helping her get away from his control/abuse and ultimately to the United States.

My only real complaint about the book is I wish it would have done a slightly better job with connecting her inventions to her movie roles. I feel like, even though Lamarr was supposed to be the main subject of the book, Antheil wound up getting more pages written about him (this may or may not be accurate, it just felt that way) and, in all honesty, a composer who spent most of his life leeching off of a patron just wasn't as interesting to me, regardless of his contribution.

Final Opinion: This is a well-written non-fiction book that gives a nice glimpse into the private life of a former Hollywood star and her contributions to science. I recommend reading it.