Book Review: The Gift of our Wounds by Arno Michaelis and Pardeep Singh Kaleka (2018)

Synopsis: In 2012, a lone gunman opened fire inside a Sihk temple near Milwaukee and killed, among others, Pardeep Kaleka's father. Two months after the tragedy, Pardeep arranged to meet with Arno Michaelis in the hopes the former white supremacist would be able to give him answers. The meeting went better than both expected and ultimately resulted in them forming a partnership. This non-fiction book tells their stories. 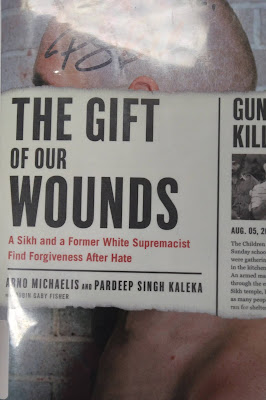 Review: I came across this book pretty much at random while at the library a few days ago. At first, I didn't know if it would be something I would enjoy reading but, since my book pile was relatively small, I decided to give it a try. It ended up being much better than I was expecting.

I think the thing I found I enjoyed most about this book was the way one of the authors was able to give the reader a very raw look into the mind of a white supremacist. The memoir was very detailed, offering a good insight into the types of things that cause a person to take such a hard stance, the ways the white supremacist message spreads and even how something as simple as becoming a parent can start someone down the path of reformation.

When compared to Pardeep's story about growing up in a world that made him an outcast, I found it was easy to pick out similarities between the two men that made their later friendship something that just seemed to make sense.

The description of the temple shooting itself was fairly detailed and managed to make me a bit sick to my stomach. In fact, given the carnage, I was actually a bit surprised there weren't more deaths. It made me especially sad when I remembered this happened not that far from where I live.

Final Opinion: This book gives a solid, detailed description of white supremacy both from the point of view of the vicitm and the pov of someone who fought for the other side. I think it is a must read for anyone who is interested in the subject.