Synopsis: Four six years, Jim and Jamie Dutcher camped in Idaho's Sawtooth Mountains so they could closely observe and film a wolfpack's social hierarchy. The non-fiction book details their experience and observations. 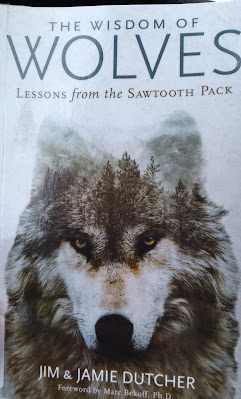 Review: I normally check out library books based on a pre-set plan, whether it is a specific title or a desire to read something from a particular genre. On occasion, however, I do end up picking out a book purely on impulse. That's what happened with this book, which I ended up checking out after it fell off the shelf while I was looking at another book.

At first, I wasn't sure if this would be a book I would enjoy. However, after I started reading it, I found I had a hard time putting it down.

The way the authors describe the wolves interactions, both with each other and the humans in the camp, wound up being much more intriguing than I was expecting. At minimum, it did change my perception about wolves and made it easier to see how their pack really was a family.

I think the thing I found most interesting was the way the wolves were so accepting of outside members, including adopting the offspring of defeated rivals and treating them like their own children. It's not the type of thing you would expect to see from any wild animal. Heck, you can't even say that about humans.

I also thought it was interesting how all the wolves played a particular role, from the alpha all the way down to the omega (the weakest in the group) and, while saying they treated each other as equals would be a bit of an exaggeration, showed respect for each other. Their description of the omega being the wolf that would encourage others to play was definitely insightful.

At first, I did find I was a bit skeptical of their observations because it was a wolf pack they essentially created from scratch rather than one that was formed under natural circumstances. However, the authors did a good job backing up their findings by citing other experts that had similar observations (though without as much intimacy).

While I'm sure there are others who disagree with them, their opposition to wolf hunting was backed up with some sound justifications based on the behavior they observed and the way the wolf hierarchy was structured. At minimum, it's the kind of thing that should be researched further, especially if killing wolves really is making things worse for farmers.

Final Opinion: It's not the type of book I would normally read but it did turn out to be one I enjoyed. I'd recommend taking the time to read it.