Synopsis: In September 1962, Flying Tiger flight 923 was flying to Germany with 68 passengers when it began to experience engine failure. Unable to reach land, Capt. John Murray was forced to "ditch" the plane in the Atlantic Ocean knowing, even if they survived the water landing and escaped the plane before it sank, they may not be rescued before dying of hypothermia. 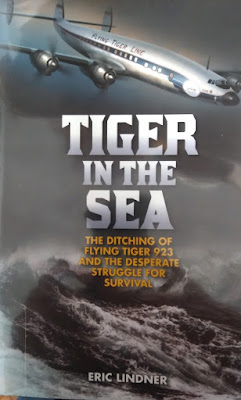 Review: Fun fact - I hate to fly. In fact, I can feel my anxiety increasing just by being around an airport (with no plans to actually board a plane). So, I should be one of the last people to read a book about a real-life plane crash but I still ended up checking out this book anyway and I'm glad I did.

I think the thing that interested me most about this book was the way it described, in great detail, the various things that went wrong in a matter of minutes. In addition to losing three of four engines (one the result of human error), the plane's passengers and crew had to deal with lost rafts, forgotten flashlights and flare guns and a variety of other miscues that reduced their chances of survival. It was both inspiring and, at the same time, sad because there were plenty of other lives that could have potentially been saved.

Another thing I found interesting about the book was the way it described the early days of air travel and just how unsafe it was compared to today. I think the part about the crew of 923 not knowing whether or not a cabin door would remain shut but still deciding to fly anyway pretty much said it all, even before some other details were revealed.

The part of the book that described the aftermath of the crash was also eye opening, especially the way the author casually suggests the inquiry purposely avoided talking about the mechanical failures of the plane and instead focused on pilot error because of Cold War politics. The argument made some sense and the author provided evidence to support that theory. If nothing else the several chapters that deal with the fallout were almost as interesting as the chapters relating to the crash itself.

Final Opinion: This is an interesting non-fiction book that is worth taking the time to read. It didn't do anything to help me with my fear of flying but was a book I had a hard time putting down.