Synopsis: This non-fiction book, which is part author memoirs, addresses the subject of racism and argues the best way to defeat it is to adopt "antiracist" thoughts and actions, beginning with racist government policies. 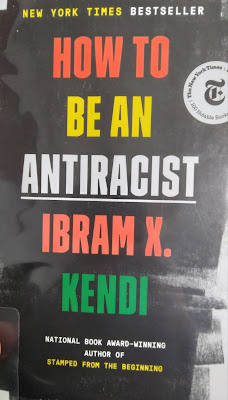 Review: One thing that surprised me about becoming a parent is how much my daughters, especially my oldest daughter, challenge me to re-think the thoughts and opinions I used to take for granted. As a result of this, I have been making more of an effort to expand my reading list so it includes voices I might not otherwise have read. That is a big reason why I ended up checking out this book from our library.

To be honest, I didn't know what to expect from this book. The title sounded interesting but, at the same time, I wondered just how much time the author would spend rehashing the same arguments I've heard dozens of times before (many of which I already agree with). As it turns out, this ended up being a book that made me question some of my previous opinions.

I liked how Kendi used both his own personal experiences along with statistics and historical data to show how racist policies suppress people of color. Some of them, as I expected, I was familiar with, such as the War on Drugs and standardized testing. Some of them, such as his claim of capitalism leading to racism and the flawed logic with desegregation, were new for me. And, while I can't honestly say I completely agree with every one of his arguments, he does make some valid points.

The personal experiences, in particular, were the most memorable thing about this book. It's one thing to spout a bunch of facts and numbers. It's another thing to describe the racism in a way that makes you feel as though you are there experiencing it yourself.

One thing that really stood out for me was the way he described times in his life when he, himself, was a racist. His candid self reflection was intriguing both because it gave a great example of why racist policies are allowed to happen and, at the same time, it made me re-think my "non-racist" description of myself. Whether I agree with him 100 percent or not, any book that makes me want to analyze my thoughts and actions is worth taking the time to read.

Final Opinion: It was a book I enjoyed reading more than I expected I would. I highly recommend taking the time to check it out for yourself.