Synopsis: Since the end of the Civil War, black farmers have struggled to prosper under an inequitable system that has (both intentionally and unintentionally) given an advantage to white farmers. The book tells their story from the ratification of the 13th Amendment through a groundbreaking class-action lawsuit against the United States Department of Agriculture in 1997. 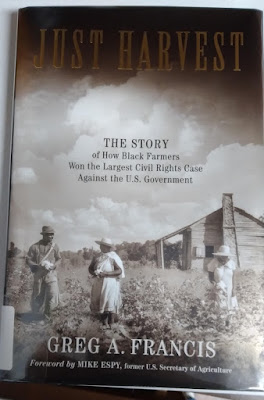 Review: I wasn't planning on picking up a non-fiction book when I was at the library a few days ago. However, as I passed the new book section on my way to check out, this one caught my eye. It looked somewhat interesting so I added it to my pile.

When I first started reading this book, I did have some doubts about it. Since it was written by a lawyer who was involved in one of the class-action settlements against the USDA, I was expecting it to be more about him and his role and not necessarily the people he was representing. Fortunately, as it turns out, I was wrong.

The thing that really impressed me about this book is it does give a fairly thorough history of black farmers and their struggles, starting with some Civil War-related background and giving an easy-to-understand recap of local and federal policies that ultimately resulted in many black people still serving as plantation slaves even though they were technically free.

I have to admit, there was quite a bit in this book that surprised me. This included the negative impact Franklin Roosevelt's New Deal had on black farmers and the systematic racism, at the federal level, that was still happening through the 1990s. It was disturbing but, at the same time, the fact many of those farmers continued to fight to survive was also inspirational.

I espeically like how the author made sure to include as many first-hand stories as he could. This added a human element that really made the inequities he was writing about hit home. The book was much more impactful and memorable as a result.

Final Opinion: This might have been a spur-of-the-moment book choice but it turned out to be a fantastic read that I would recommend checking out.