I Am Now Fully Vaccinated 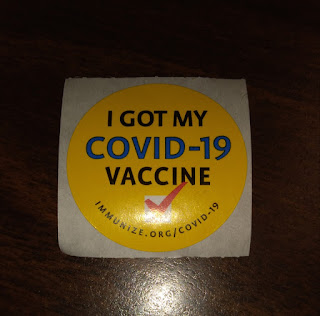 I just got my second dose of the Moderna vaccine a little while ago. So far, so good.

This was honestly a tough decision for me. I'm not really an anti-vaxxer but, since I don't get sick too often, I've always been skeptical of things like the flu vaccine, etc. And, there was a big part of me that was tempted to just ride out this current storm as well because I figured, even if I did catch COVID, there was a good chance it wouldn't affect me that much.

There were a couple things that ultimately influenced my decision. The first was the half dozen or so nurses I know that have spent the last year on the front lines. Frankly, their horror stories scared me, not so much because I thought I would end up on a ventilator as much as the thought of my wife or one of my kids ending up on a ventilator because they caught it from me.

The other thing was I really would like things to start getting back to normal. My oldest daughter graduates next year. I would like to see her walk the stage, which may or may not happen if this COVID stuff continues, and I know she would also like to tour some college campuses this summer.

As of right now, I am having no ill effects from the second dose, though that could change in a few hours. The first dose knocked me on my butt though. I hadn't even made it through my 15-minute observation period before I started feeling flushed from it and I felt under the weather for nearly a week. I am hoping that first dose built up enough immunity for this second dose to not hit me as hard.