Synopsis: In 1942, with World War II raging in Europe and segregation still prominent in the military, the United States Army formed the all-black 761st Tank Battalion. Even though the recruits excelled in training exercises, many believed they would never be tested in combat until a shortage of tank crews resulted in the 761st serving under General George S. Patton. Once in Europe, they had to fight both the Germans and the racism stemming from the all-white units they served with. 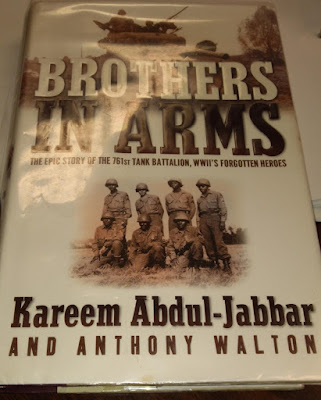 Review: To tell you the truth, when I came across this book in our local library, I was less intrigued by the subject material than I was about the fact it was written by a former professional basketball star. In fact, the only reason I checked the book out was I was a bit curious why Kareem Abdul-Jabbar decided to write a history book. As it turns out, the book wound up being a good choice.

There were a lot of things I liked about this book when I was reading it. One of the main ones was the way the 761st's story is told in a way that puts the reader on the battlefield with the men that were involved. It wasn't a book that relied on facts and statistics to make a point, it lets you get to know the people on a more personal level so the things that happened to them have a bit more of an impact.

In particular, the way the book describes both the battles and the lives of the tank operators really stood out for me, whether it was the horrific ways people were killed or stories about how they had to survive freezing-cold temperatures inside machines made of metal while wearing rags because they had no opportunity to get new clothes or even bathe.

The descriptions of some of the treatment they received, both when they were training and when they were fighting, were eye opening. You would think, after proving themselves in battle, they would have gotten a bit more respect, especially from the men who witnessed it first hand. It was a bit ironic and sad they seemed to get more respect from their enemies.

In addition to telling the story of the 761st, I thought this book did a decent job of explaining World War II in general as well. There are some easy-to-understand descriptions of combat strategies used by both Allies and Germany. Plus, the book doesn't shy away from pointing out critical errors made by Allied commanders, especially Patton, that resulted in more casulties than were necessary. I think I found some of that information as interesting as the info about the 761st itself.

Final Opinion: This was a surprisingly good book that exceeded my expectations. Whether you are reading it because of an interest in black history or World War II, I'd recommend it.