Synopsis: In 1841, Solomon Northup, a free black man living in New York, is kidnapped and sold into slavery. Unable to tell anyone the truth about his origins out of fear for his life, Solomon has his name changed to Platt and spends the next dozen years enslaved by multiple masters with varying levels of cruelty. 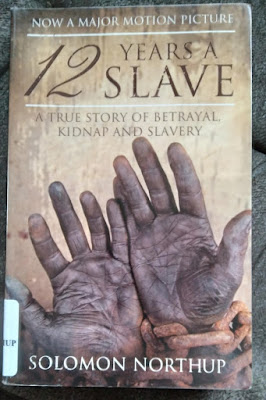 Review: I'm not really sure why it took me so long to read this book but it wound up staying off my radar, even after someone based a movie off of it (which I also haven't seen). That changed recently when I came across the book at the library and, not currently having anything else in particular I was looking for, I decided to read it.  I now regret waiting so long.

It's one thing to learn about slavery in the United States from history books. It's a completely other thing to learn about it from memoirs written by someone who experienced it first hand and, after finally doing so, I don't think I will ever be able to think about that period in our history without feeling a lot more sad about it.

One thing, in particular, that stood out for me was the way Northup described slavery in a way that made it sound like they were treated in the same way livestock would be treated. There was a monetary investment involved and the slave owners kept that in mind when dealing with their "property" but, at the same time, it was a philosophy that made some of the cruel measures seem even more inhuman.  In particular, his description of cotton picking and how slaves under one of the owners were whipped for not making quota but, at the same time, exceeding their quota could potentially result in future punishment because the larger amount would become the new quota. It was as though their "master" was looking for a reason to whip them.

Another thing that stuck with me when reading this book was the overall general feeling of hopelessness he must have felt. He was unable to communicate with his wife and kids and he couldn't even trust the more benevolent slave owners with his secret because it likely would result in him either being killed outright or sent into Mexico. Plus, since they changed his name, anyone that might be looking for him would have an impossible task.

His description of the slave owners as victims of the slave trade was an intriguing one, especially when he talked about their random violence toward each other and connected it the loss of humanity created by owning other people. It was a very deep and profound idea and it made me wonder how someone that obviously has a decent education (for the time at least) was able to keep his secret as long as he did.

Final Opinion: This book, in my opinion, should be required reading in all history classes (though I'm sure the use of the "N" word probably disqualifies it). I learned a lot more about slavery from this book than I have from all other books I've read combined and am glad I finally took the time to read it.