Book Review: The Oxford Illustrated History of the Book Edited by James Raven (2020)

Synopsis: Written language is one of mankind's greatest inventions but became much more useful when our ancient ancestors figured out how to make it easily portable. Through a series of essays written by multiple experts, this compilation tells the history of "books" from the use of clay tablets through modern times. 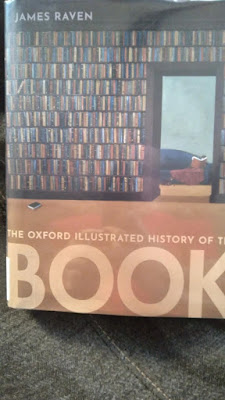 Review: I came across this book while looking for something to read at our local library. While it isn't something that would likely be appealing to a lot of people, I did think it was an interesting subject and decided to give the book a try. I wasn't disappointed.

It's not something that gets thought about a lot, but the written language would be relatively useless if we hadn't found a way to make it easy to transport from one place to another. Today, that's relatively easy, especially with the World Wide Web but, in ancient times, the methods were much more limited. As a result, I enjoyed reading about how those ancient civilizations made use of the material around them and how they eventually adapted the technology so it was lighter and more affordable.

The book also makes sure to focus on different parts of the world during certain times in our history, giving a side-by-side view of how the technology evolved based on geographical location and culture. This made it easier to piece together the big picture by putting things in perspective.

Another thing I found interesting about this book was the way it didn't hesitate to discuss the things we still don't know about this subject. For example, the section on the Gutenberg press talked about how, to this day, we still don't know what the press looked like or how it worked because the technology from that era didn't survive. I have to admit, that was something I didn't know before.

If you like books with lots of pictures, this one won't disappoint. In addition to the essays, this book provides plenty of visual aids to make it easier to understand the topics they are discussing. I personally found some of the shared pages fascinating especially since they were produced with such relatively primitive means.

Final Opinion: Again, it's not a book everyone will enjoy but, if you like non-fiction books, this is one that is worth taking the time to read if you have an opportunity to do so. I learned a lot more than I was expecting to learn.