Synopsis: An orphaned Tracy Marrow is sent to live with an aunt in gang-infested South Central Los Angeles and, like many people from that area, eventually lives a criminal lifestyle until a near-fatal car accident forces him to shift his focus and he becomes a successful rapper and actor. 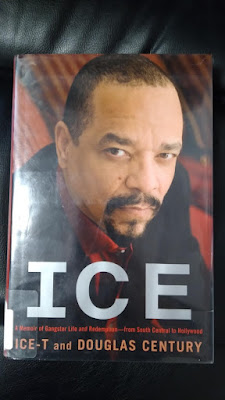 Review: My wife and I are familiar with Ice-T from watching Law & Order: Special Victims Unit and, when I came across this book at our local library, I decided to check it out as a result. I was able to finish it before going to bed last night and, overall, I thought it was an interesting autobiography.

I think the thing that really stood out for me when reading this book was the way Ice-T didn't shy away from talking about his past.  A lot of other writers might have omitted or only vaguely referenced criminal activity they might have been involved with. This book, however, goes into quite a bit of depth about what Ice-T was involved with before turning his life around. This includes describing the jewelry store robberies he helped commit (the ones that were past the statute of limitations) and even gives a brief "how-to" guide for being a pimp. I think I enjoyed that part more than I did the behind-the-scenes stuff regarding his rap and acting career.

Another thing that stood out for me was his blunt description of the racism he faced when living in New Jersey. It was interesting to read how he "passed" because of his lighter skin tone while other kids of color either weren't invited to certain homes or were required to go home after dark. As someone who has never experienced racism first-hand, descriptions like that really do help make it a little easier to understand the problem. It also made me wonder what would have happened had he not "passed." Would he still be successful or would he be in prison (or worse)?

His life lessons at the end of the book are also a fun read, to the point I actually read that section twice (a rarity for me). In fact, it is something I would recommend reading even if you don't bother reading the rest of the book.

Final Opinion: Autobiographies tend to be a bit hit or miss because the authors usually omit stuff that paints them in a bad light. This book has enough detail of Ice-T's life before he became famous to make it a memorable read and I do recommend the book as a result of that.