My oldest daughter had to take the ACT yesterday and, since she is home schooled, that meant my wife and I making an hour-long drive with her so she could take the test in Oshkosh, WI.

She didn't get an opportunity to eat a whole lot before the test and only had a light snack with her so, mostly because it was right next door, we stopped at Pizza @ Hwy 44 for lunch. This was our first time dining at this restaurant (which opened last spring) and, overall, I have to say I was impressed. 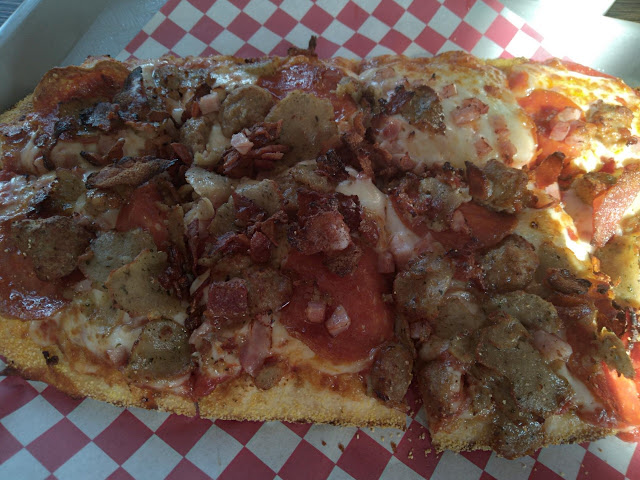 There were a couple things, in particular, that really stood out for me. One of the main ones was the pizza itself. The three of us each got a personal pizza, which I thought were a reasonable value at $8.95 each. Not only was the pizza delicious, the generous amount of toppings on the pizza made it much more filling than I was expecting it to be.

In fact, I ordered the wound up having it for lunch yesterday, dinner later that evening and had three extra pieces leftover for lunch today. That added much more value to what I thought was already a reasonable price.

As far as overall atmosphere goes, I thought it was a nice restaurant and was a bit surprised it wasn't busier. It was clean in there and the staff was helpful and friendly. If I had any complaints, it was it was a bit hard to hear when ordering food because of the noise from the pizza oven but that wasn't too big of a deal.

We have plans to go to Oshkosh next month (my other daughter has to take an exam) and will definitely be planning on having lunch at this restaurant when we do.