Synopsis: As silent movies became popular in America, Lon Chaney was able to become a top star due largely to his ability to use makeup to bring various characters to life. This non-fiction book tells about his rise. 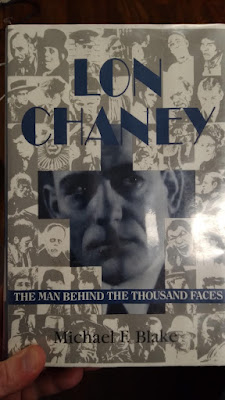 Review: I've never been a huge silent movie fan and, while I have seen some films, honestly haven't watched as many as I probably could have. As a result of this, while I knew who Lon Chany was, I wasn't overly familiar with his work outside of the Hunchback of Notre Dame. I came across this book at our library a few days ago and, thinking it was interesting, I decided to read it.

Overall, I thought the book was very informative. The author gives a good play-by-play of Chaney's career, starting with his start at a local theater and ending with his reluctant transition from silent films to a a movie that had sound. The way his makeup effects both created unique characters and influenced an industry was impressive, especially when considering his relatively young age.

Another thing I found interesting about this book was how it gave a solid overview of movie history in general. This included discussion about the Motion Picture Patent Wars and the creation of Hollywood as well as the various film innovations that occurred.

My favorite chapter was the one that described movie makeup and the innovations that were necessary for it to keep up with different types of black-and-white film as well as the introduction of incadescent lighting. It was something I honestly never even thought about until reading that chapter and it was reall intriguing.

I think my only real complaint about this book is it doesn't spend a whole lot of time talking about Chaney's personal/family life, other than the occasional mention to put his movie career in context and, of course, the well-publicized split from his first wife. It didn't need to be anything controversial or scandalous, just maybe a little more about the father/husband he was and maybe some additional detail relating to the things he enjoyed doing when he wasn't acting. But, to be fair, the author did say Chaney was a private person and maybe that is the kind of stuff that needs to be written by someone who actually knew the man personally.

Final Opinion: It's an informative book that taught me a lot about both Chaney and the early movie industry in general. I'd recommend reading it, especially if you like classic films.