Book Review: The Case of the Fiery Fingers by Erle Stanley Gardner (1951)

Synopsis: When Nellie Conway comes to him with a story about her employer, Nathan Bain plotting to kill his wife, Elizabeth, Perry Mason tries to distance himself from her as much as possible but ultimately is forced to defend her against theft charges. When Elizabeth is poisoned shortly after, Mason is once again brought into the fray and defends Elizabeth's sister, Victoria, against murder charges. 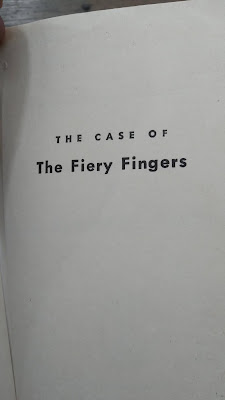 Review: I wasn't 100 percent sure if I wanted to check out another Perry Mason book the last time I was at the library but, just in case there was another COVID-related closure, I figured I'd grab this one. I finished it while waiting for my daughter at the ice rink last night and, while it was OK, it wasn't one of my favorites.

I think the thing that bothered me about this book is many of Mason's actions really don't make a whole lot of sense. He doesn't want anything to do with Nellie Conway (for reasons that aren't fully explained) but still travels to New Orleans after the murder takes place to talk to her and investigate a case he had worked so hard to distance himself from.

In fact, by about halfway through the book, I found I was extremely confused about who his client was supposed to be. He made it clear it wasn't Nellie and, while Elizabeth had wanted to retain his services, she was killed before it happened. Him ultimately defending Victoria, someone he had little previous interaction with, seemed a bit random as a result.

The mystery itself was a bit of a disappointment as well. Even with the various distractions involving Nellie and various Bain family members, it wasn't too difficult to figure out who poisoned Elizabeth. In fact, I was left wondering if maybe Mason is starting to slip a bit considering it took him almost the entire book to figure it out and that was pretty much by accident.

Final Opinion: Again, it's an OK book but isn't one of my favorites from this series. I'd describe it as average, at best, when compared to other Perry Mason cases.