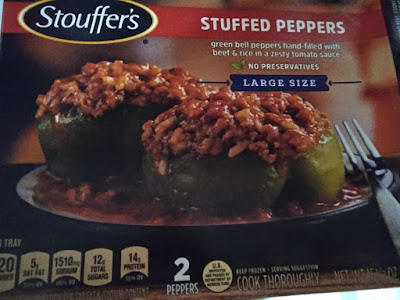 I had intended on making a steak dinner for the family last night but a hectic evening forced me to call a last-second audible and run to the grocery store for frozen meals instead.

I have had this product in the past. However, it had been several years since I last purchased it and I couldn't remember much about it. In fact, I spent a few minutes debating whether or not I really wanted to give this a try again or pick out something else. After having it for dinner, I am reasonably glad I made this purchase ($3.86).

One of my biggest concerns about this product was how well the green peppers would turn out. Microwave dinners usually don't come out anywhere near as good as pictured and I figured the peppers would wind up being overcooked and tough. However, it turns out that wasn't the case. The peppers ended up cooked just right and I was able to cut into them, with little effort, using my fork.

As far as flavor goes, I thought this product was OK. The sauce was a bit rich for my taste and I definitely enjoy homemade stuffed peppers a lot more. But, at the same time, I didn't hate it and, when the price tag and convenience are taken into account, it wasn't anything that made me regret my purchase.

I also thought the dinner was filling. The peppers on the box looked a lot larger than the ones that came with the dinner, but it was still enough to satisfy my hunger without me wanting to snack on something an hour later. So, I'll consider that a win as well.

Would I buy this product on a regular basis? Probably not. I would, however, consider it as an option if I am in need of a last-second dinner choice again.