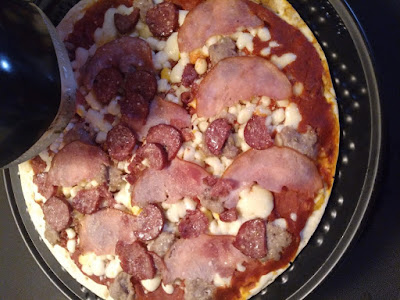 I had planned on leftovers for dinner last night but, after cleaning out the fridge, realized we really didn't have enough leftovers to do that. As a result, I called an audible and had frozen pizza for dinner instead.

I purchased this particular one through an ice rink fundraiser. While I've seen these at stores (for $4.99), I haven't been overly anxious to try them because my wife and I both aren't big thin crust fans. However, after having it, I thought it was an OK choice.

The thing that really stood out for me when it came to this pizza was the number of toppings on it. There was a reasonable amount of meat, something I honestly didn't really expect considering these are usually less expensive than many other brands that do skimp on toppings. It probably could have used a little more cheese but, otherwise, I was happy with this.

The sauce had an OK flavor to it. It had a decent blend of seasonings in it without being overseasoned. I, personally, would have preferred a little less sauce (in exchange for more cheese) but, since it did have so many other toppings on it, I was willing to overlook it.

Is it a brand I would buy all the time? Probably not (like I said, we aren't fans of thin crust pizzas). However, as a budget choice, I would consider purchasing it again.