Synopsis: When Elizabeth Tudor was named queen of England in 1558, her kingdom was on the verge of financial ruin and her life was under constant threat from those who did not want to see her in power. This non-fiction book tells the story of how she used private merchant vessels and pirates to rebuild the kingdom and turn it into an empire. 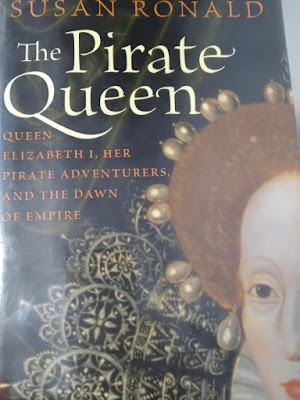 Review: I was in the mood to read something educational and, now that our library has re-opened following a COVID-related shut down, I took the time to visit the non-fiction section. This book looked somewhat interesting, so I decided to give it a try. Overall, I have to say I was happy with that decision.

The book, as advertised, does go into detail about Elizabeth's dealings with the likes of Sir Francis Drake and Sir Walter Raleigh. However, as I read the book, I found I was less interested in them than I was Elizabeth herself and, in particular, how she used an amazing amount of cunning to keep the wolves from getting in the door.

The author does a great job of describing the situation Elizabeth faced when she became queen. The Catholics didn't want her, the kingdom's coffers were empty, the country had no way of defending itself against an attack and there were enemy armies just waiting to strike. Yet, despite all of that, she remained in power and played the other countries against each other just long enough to fix her kingdom's problems (though, admittedly, there might have been some luck involved too).

I especially found it a bit hilarious that one of the people she managed to con, Spain's Phillip II, was also a big part of the reason she became queen (instead of being executed at her sister's hand long before that happened). I almost felt a little bad for him, to be honest.

I also liked how the book balanced things out by talking about Elizabeth's shortcomings and failures, including trusting pirate crews that would steal large portions of the money before returning it to England and not doing as well with its western colonies as had been hoped. I've read a lot of non-fiction books that were a bit too one-sided and do appreciate an effort to show the subject wasn't perfect.

Final Opinion: It's an interesting and educational book that I enjoyed reading. I'd recommend it to anyone wanting to learn more about Elizabeth I.