Synopsis: Ethan Gage, an American expatriate who learned about electricity under Benjamin Franklin, is living in post-revolutionary France when he wins an ancient Egyptian medallion in a card game. He doesn't believe the rumor about the medallion being cursed but, shortly after winning it, ends up being framed for a prostitute's murder and, to escape the charges, joins Napoleon Bonaparte's expedition to Egypt. 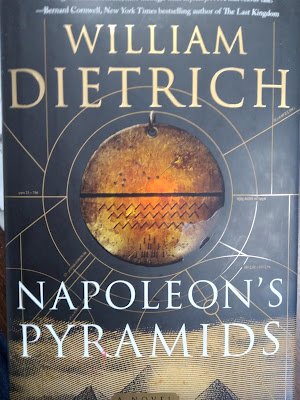 Review: I got this book as a Christmas present from my wife and, while it wasn't something I would normally consider picking out on my own, I did think the plot sounded somewhat intriguing. I finally had a chance to finish the book yesterday evening and, overall, did enjoy it.
There are a couple things about this book, in particular, that really stood out for me. The main one was definitely the mystery surrounding the medallion. From the time Ethan wins the artifact, it seems like everyone wants to possess it. Yet, at the same time, he can't find anybody who can give him even a theory as to why it is of so much value.
Since it was obvious someone had to by lying to him about the medallion, it also created suspicion about anyone who knew about it. As a result, I read the book waiting to see which of his "friends" would eventually choose to betray him. This added a little extra something to the book.
I also found I liked the descriptions of Napoleon's attempt to conquer Egypt. Since I honestly don't know a whole lot about Napoleon, I couldn't vouch for any of the information being historically accurate. However, from an entertainment standpoint, it was still interesting to hear about the European leader and the book does a solid job of showing both his good and bad traits rather than just focusing on one or the other. If nothing else, it gave more context to the overall story and kept it from getting dull.
While there was, admittedly, quite a bit of action, I did think the ending of the book was a little drawn out. Fortunately, the overall book did make up for that one flaw and I was able to overlook it.
Final Opinion: It's an interesting piece of historical fiction with just enough action and a decent mystery to keep it interesting from start to finish. I'd recommend taking the time to read it.
My Grade: A
action books books books about egypt books about napoleon fiction books about napoleon historical fiction mysteries